The End of Fertility

We agreed we were done. A son, a daughter; both beautiful and healthy. Being one of four children, I could have been easily swayed toward having a third child in our house. But, for both my wife and I, age began to tap its foot, and the availability of our potential energy lessened.

Our youngest is four years-old, which means it's been at least a couple of years since, as a couple, we courageously acknowledged there would be no more children. Personally, it wasn't the sleeplessness of caring for a newborn which seemed most daunting, it was chasing after toddlers. I watch each of my children reach new milestones daily, as they transform from pre-schoolers into images of the adults they will one day be. It can be thrilling, frustrating, challenging, and inspiring, and with that transformation in full bloom, we knew we didn't want to be back at the beginning.

So, how to halt the process? If fertility were a corporation, we would hold interviews for the candidates best suited to run the company into receivership. The Pill? A candidate with a high success rate, but while it may halt fertility, the side effects could make the building itself unstable, and unpleasant to do future business in. Condom? Only slightly less effective, but with a tendency to kill the mood by interrupting the company christmas party with long speeches. The IUD? Not all companies welcome foreign investors. A Vasectomy? Ahhh, aren't all corporations prepared to take a short-term hit if it will result in future prosperity? You bet.

After receiving a referral to a urologist, I was expecting (actually, counting on) being hurled onto The Waiting List, which masquerades as our Universal Healthcare System, for several months. During that time, I could bask in the courage of my decision, while being far enough away from the actual procedure that I wouldn't really feel any sense of commitment to it, or fear of it. But alas, I was in His office one month after my phone call, and pulling my pants down in that same office on a Saturday morning (?!) two weeks later.

Here's the information I'd been privy to about vasectomies prior to being the procedure's next client: it takes about fifteen minutes, it's relatively painless, you are sterile two months later, and - if you're this sort of fool - it's reversible. Here's what the procedure entails. Even the patient leaving the doctor's office as I was entering it (the urologist had about 10 vasectomies planned, at half-hour intervals, all morning) said "It doesn't hurt much, it just feels weird. And I don't think I've ever sweat so much." I admonished him for wearing a thick black sweater to a procedure which included a needle, a scalpel, and his scrotum. Still, I found his review encouraging; I could deal with uncomfortable much more readily than I could deal with pain.

After signing some papers in his office, the urologist - shall we call him Uri? - sitting across from me on his desk, instructed me to drop my pants and underwear, throw them on the visitor's chair, and follow him through the door to the adjoining exam room. There, the mini-operating theatre was ready. The typical black vinyl exam table shone in the warm glow of a surgical spotlight, and a nurse who we shall call "Trixie" was present to "help me out". As I lay on my back, bearing my scrotum and other pieces to Uri and Trixie, I noticed the music of choice was opera. The soundtrack was not only adding little-needed gravitas to the procedure, it was also doing nothing to calm my anxiety. The last time I lay still listening to opera, the Corleones were taking out the heads of the Five Families. 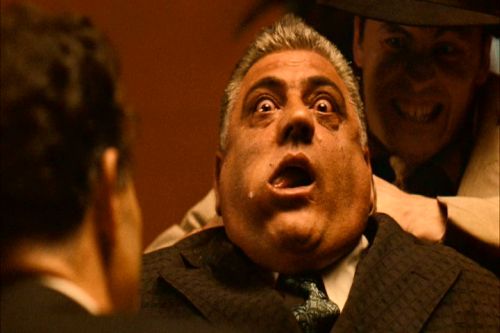 The first thing I felt (after the ironic application of alcohol to render the area 'sterile'), was a sharp 'prick' (another touch of irony - why not?). It was painful enough to make me wince, curl my toes, and take a sudden deep breath. It was at this point I understood Trixie's role was to apply gentle pressure to my left hip, holding me still, while Uri worked to my right. What I was feeling was the anesthetic being injected into my scrotum. Better to suffer the momentary pain of anesthetic application than to suffer the prolonged agony of no anesthetic at all, yes?

Normally, when one receives some form of anesthetic, they are told by the doctor that it may take a couple of minutes for the numbness to set in before we begin the procedure.  Not Uri. Seconds later, I felt a painful cut, or two, or three. I winced again. Finally, I could sense the cool numbness of the freezing taking place, and I felt nothing more. I could sense a slight pulling, hear a little clipping, as well as the searing of the cauterization, and the slight odors which accompany anything being torched. But, I relaxed as I knew the worst was over. I then realized, he had only snipped the Vas Deferens on my left testicle, the right one was next. 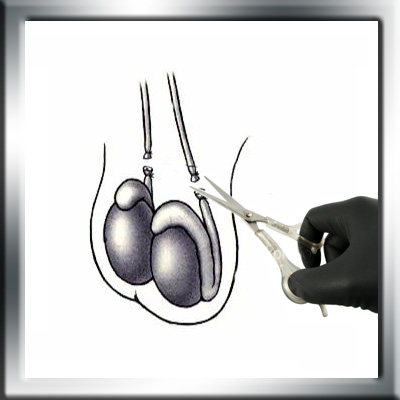 When the whole procedure began to be replicated on my right side, I yelped. "Am I not paying for anesthetic???" I asked. (While the 'procedure' is covered under the umbrella of our "Universal Healthcare System", there is a $300.00 office fee for, among other things, anesthetic.) "That was the anesthetic." Uri replied. 7 minutes later, I was told to hold the gauze in place, put my pants back on, and not to go jogging for a week.

There were several positives to the experience: In anticipation of discomfort, I arranged for the kids to spent two nights at their grandmother's. This gave me two days of serious couch time while my brother and a friend barbecued my lunch, my wife and I watched a movie (The King's Speech helped put the vasectomy into some perspective), and the following morning I watched Rafael Nadal beat Roger Federer in the final of the French Open. I also blogged for the first time. 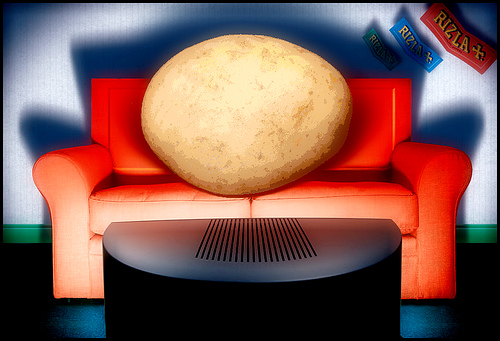 A day later, I have no regrets about having had the procedure. It will make me much more relaxed during personal matters, and I should be back to 100% in another day or so. Two months ago, upon asking for a referral to a urologist, I remarked to my general practitioner that it is clear that a chapter of my life has come to a close. When I first saw him 21 years ago, I was concerned about acne, now it was hair-loss and runaway sperm. But hearing 50-something Uri talk about his motorcycle and iPod, I realize that at 39 there's a lot of fun left to be had, even if it doesn't involve an infant drooling, crawling or taking a first step. And besides, worst case scenario...it's reversible, isn't it?

Final thoughts: While frozen bags of peas, and gel packs are great for reducing swelling in the area. Rather than run to the pharmacy for gauze, use panty-liners; they're sterile, absorbent, and adhesive. Man up.

Interesting. I like how you explain it, might be helpful for my husband. We are probably going to take this route. Still might have 2 more kids, But still not sure.
I have to say I laughed out loud a lot. haha ;)

Will have to get my husband to read this. :) I have to say I laughed out loud a few times. haha ;)

We have our one boy and one girl, too, but since we got them all at once (twins) we are on the fence about maybe having one more. I'll have to share this with the hubby, it just may help us come to some decisions over here!

I'm not quite sure what to say here... :) But I will tell you that you got me hooked in your opening paragraph. It was indeed very interesting and educational. Great writing! (Hey, I do know what to say after all!)

Wow, I think I kind of held my breath and swallowed hard through this post. Whew.

Personally I never understood why anyone would get a vasectomy. The IUD seems perfect... very low risk and very high effectiveness and most important, easily reversible. Vasectomies can have very serious side effects, like constant pain or impotence. Plus they are pretty much irreversible. How can people be so sure they will not break up or one partner die, or even one of their children dying ant they will want to replace them? Of course every married couple will say, "Oh we are sure we will be forever together". All I say to that is, "Seriously?"

I don't know whether you have children; it would be important to understand who I'm addressing. The IUD seems perfect, unless you're the one who has it floating around their body for a decade or two. That is a choice a couple has to make together. As for myself: I'm forty years-old with two young children. I can't imagine being without my wife; but, should that happen for whatever horrible reason, I know I would not want to start fatherhood over again. A vasectomy is a one-off, with low risk. It gave me great peace of mind without requiring a foreign body floating around my wife's uterus ad infinitum. So, even if we're not together forever, I have all the children I want. Seriously.