« Those Moments: The Affection and Agony of Parenting. | Main | A Family Dog is a Long Way Off. »

The Charms of Family Rest Stops are Gone.

I've just returned from a family road trip along a stretch of Canada's busiest highway: the 401 between Montreal and Toronto. As a child I made this journey several times, it used to be 550 kilometers (342 miles) of peaks and valleys of boredom and intrigue. Now it's a trip through the Twilight Zone. The Road Trip - Way Back When:

Growing up, my only first cousins lived in Toronto. While I couldn't wait to visit them - they were a decade older than me, and as such commanded a fair bit of hero worship - the drive west would inspire only dread. Were we two adults and four children travelling before the era of mini-vans and portable DVDs. We were six people in a sedan, with luggage filling the trunk, and nothing more than a colouring book and a Star Wars figurine each to keep us occupied for the six-hour trip. My sister and I are the youngest, which meant she was sandwiched in the front between my parents (remember the joys of bench seating?), and I was shoulder to shoulder with my two older brothers in the back. As the youngest, we were always forced to sit in the middle since we were also the shortest; this meant our little legs were the most suited to dealing with the exhaust hump running down the middle of the car. The middle position of my family's sedan made flying economy feel like napping in a Barcalounger. Not only was the seat itself cramped, but while my brothers could rest their heads and pillows against the windows, when I dozed off my head would loll against one of their bony shoulders, only to be unwelcomingly shrugged back towards the middle of the vehicle; there were no headrests  of consequence.

All this to say: I really looked forward to those rest stops.

We almost never stopped for fast food. My whine of "I'm hungry" was often met with an offer of fruit. Great; only 437 kms and four peaches to go. Every hundred kilometres or so, there were rest areas; a place to park the car and make use of relatively clean washrooms, picnic tables and a set of monkey bars. In between each of those was a service centre equipped with a saucer-shaped fast-food restaurant (usually Kentucky Fried Chicken or burger joint), and a Texaco gas station. We would only stop for gas, having already consumed our apples at the park thirty-minutes earlier.

Each of these stops had it's own examples of uniquely grungy features; rust around the supports of the UFO-shaped KFC, an overflowing garbage can (showing evidence of all the yummy pre-packaged treats being eaten by the other kids in the other cars) in the playground, and a huge RV with a California licence plate at the Texaco station. That was then. This corridor has recently undergone an overhaul. Imagine taking your favourite wrinkly, tie-died t-shirt, soaking it in bleach until it is as pristine as a sheet of loose leaf paper, and then ironing it until it has the smoothness of a bowling alley.  It is now just one of a billion white t-shirts being churned out for pennies a day, and sold in packages of three at department stores. Welcome to the Montreal-Toronto stretch of the 401, version 2.0. All the picnic areas have been removed, the Texaco's dismantled, and the UFO design launched space-ward. In their places: ON Route. These fourteen new service centres are immaculate, modern, and well thought-out. Each offers washrooms with the latest no-touch flush, and wash and dry technologies, efficient fast-food services, and a convenience store for the health-conscious traveller (one can even purchase a pair of hard-boiled eggs, already peeled and vacuum-packed!). They are also all...identical.

At first, after a hundred kms or so, the initial ON Route is a welcome site. It's bright, it housed an Ontario Tourist Information Centre, in which an attendant offered my son a free map of the province, and both kids spent several minutes at the Airblade Xlerator Hand Dryer in the bathroom. But after two more hours in the car, we came upon another ON Route - identical to the last. Not just similar in colour scheme and structure; identical. Same building, same physical landscaping, same geography in the parking lot, same layout in the bathroom. My son was the first to speak: "Why are we driving in circles?” My daughter was soon to follow: "Weren't we here already?"

Before leaving on the road trip, my mother was agog at the fourteen tons of bags, toys, suitcases, and paraphernalia stacked by the front door, ready to be stuffed into the rear of the vehicle.

She reminded me how our family would make the same trip, with fifty-percent more passengers, and less than half the stuff.

Fortunately, we do live in an era of mini-vans, portable DVDs, and bags full of activities to keep the kids busy. It behoves us to keep things changing inside the vehicle as it travels along Canada's busiest stretch of road, since someone is seeing to it the stretch of road itself doesn't change at all. 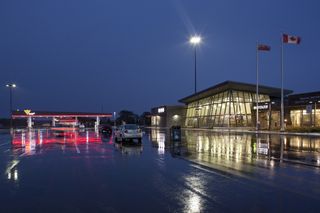