« Personal Space: Those Who are Too Close for Comfort. | Main | The Relationship Bank: Is a Manicure Worth the NFL Conference Finals? »

Bartholomew and the Oobleck. A Dr. Seuss classic in which King Derwin of Didd forces his magicians to concoct a new form of precipitation; he's tired of the same-old, same-old rotation of sunshine, fog, rain and snow. The result is Oobleck: a limey, thick, sticky goop which really gums up the works in the Kingdom of Didd.

My daughter chose this as our bedtime story the other night; it was one I had read countless times as a child, and it is still as magical. Not only did I, as a pre-schooler, own the book, but I also spent hours wearing out an LP (!) which on side A told the story of Bartholomew and the sticky, invading goo, and on side B recounted a similar ego-driven disaster for Yertle the Turtle. I had a small collection of Dr. Seuss stories I would listen to alone in the basement; my imagination stirred by stories being read out for me at the steady speed of 33 1/3 revolutions per minute. 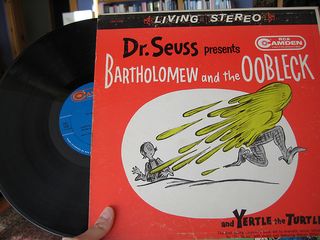 Even today, when I read these stories to my children, especially "Sneetches and Other Stories", I can't help but imitate the voices I heard from my record player 35 years ago.

There are other things which, for some reason, I recall with great clarity from my childhood. For instance: leaving my bedroom on my seventh birthday to discover the new X-Wing fighter my brother left for me on the threshold of my door. It seems, sometimes, there is no logic to which memories I retain or forget. When I was about five-years-old, we boarded a train for Winnipeg. We had a sleeper car; we were gone for several days. Yet, all I remember from the trip is wandering from my berth to the coach car where one of my parents was seated, only to look down and notice I was wearing only my underwear and a t-shirt. Why would I remember that, yet nothing more from a trip out west? Maybe because it imitates so closely the classic nightmare of showing up in a public place, naked. I remember hearing Sgt. Pepper for the first time, also at about the age of five; my cousin - ten years my senior - slipped a set of (huge!) stereo headphones over my ears, and set the needle on the record. Through the magic of hi-fi (with wire), it seemed to me those first notes of the orchestra tuning up surround me, coming from every direction. I remember getting into an argument with a friend over a game of pitch and catch - I was about 10 now - and him getting so angry he threw a bat at me (though I don't remember what I said, I do remember having a big mouth back then). I remember staying up overnight to watch "Three Women" with my brother, and using instant coffee to make through until morning, when I headed to high school in a fog. I remember my first real kiss: April 21, 1986. I remember my surprise that this was really happening, and a sense of panic at the realization that not only did I have no idea what I was doing, but that, since we were at a bus stop, the #66 could pull up any minute, and catch me in a awkward lip-lock. I also remember thinking she kissed me in a manner which suggested I wasn't the first boy she kissed. I even remember the birthday of the girl involved; she turned forty on Tuesday. 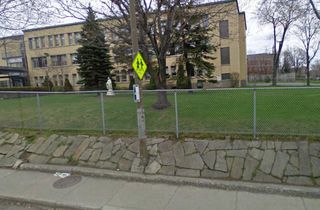 Yet, while watching a home movie of my son as a two-year-old, I realize how little I remember of him as a toddler. Why is that? Why would I retain so much useless information from decades ago, yet not be able to recall moments involving my son from so recently? When discussing with my wife where to hold the kids' next birthday parties, I realize I don't remember where we had their last ones.

My mother has framed photos of each of my kids on her wall. Each frame is comprised of eleven small photos:  one for each of the first eleven months of their lives, and one larger photo on the middle, taken on their first birthday. As I examined them, I remembered the children looking like that, but I have such little recollection of the person they were; how they were, at that age.

I think of that often, now. When my son is twelve, will I remember how he was at seven? When my daughter has a four-year-old of her own, will I be able to tell that pre-schooler stories of how her mother was at that age? Or, rather, will the only memories which live that long be the same ones which have already survived these past few decades? Will the Sneetches, and Oobleck, and Yertle, and Sgt. Pepper hold more prominence in my memory than the moment my children first walked or spoke?

Perhaps my early memories, recorded at 33 1/3 revolutions per minute, were easier to hang on to than more recent ones, which seem to be streaming through me at 100 megabits per second.

Posted at 08:43 AM in Fatherhood, Life Before Kids, Parenting | Permalink