« An Open Letter to the Supporters of my Huggies Petition | The Daddy Doctrines | Main | I'm Not a Creep. I'm a Pre-School Volunteer, and I've Got the Badge to Prove It. »

Of COURSE I Have Mood Swings. Why Do You Think It's Called a 'Men'strual Cycle?

Moodiness, irritability, trouble sleeping, a pimple which arrives with more stealth and suddenness than Vesuvius.
Allow me to introduce myself, I'm Kenny Bodanis, and I'm PMS-ing .

Could it be we all have cycles?
Ok, ok, calm down for a minute. Allow your eyes to roll all  the way around and then refocus on the screen...I'll wait. 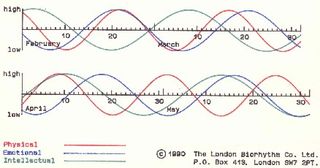 Even as kids, I remember becoming interested in a book my brother had about Biorhythms. The philosophy is: we each have emotional, physical, and intellectual ebbs and flows. Discovering and tracking my biorhythm was a three-month pastime when I was about ten years-old. I know, I was an unusual kid.

Intellectually, I perceive biorhythms as I do horoscopes and full moons. Phenomena related to theses texts in the newspaper or cycles of a celestial body are pure coincidence. People are not crazy because it's a full moon; the relationship between the two only feels as such when we look at a crazy guy and then glance up and notice the moon is full. Had this guy been acting crazy any other time of the month, he would just be an obstacle to my getting on the public transit system.

I absolutely believe female PMS is the real deal. Each month a woman's body goes through inarguable physical and emotional changes as it prepares for a baby. If there is none, the body resets itself for the next attempt. (If there is a baby, well, that's another post altogether.)
Women have PMS; let them own it. Support them.
Now, back to me:

Is it possible there is an inherent flow to us all? I don't chart my mood swings, but I know I have them. I also recognize there are days when I feel discouraged for no good reason. It is not severe enough to describe as depression, but significant enough that, for a day or two, it affected me and those around me.
Even looking through some past posts I realize how often I write about fatigue, or bad moods. Couple those days with body pains and fly-by acne, and there you have it...Guy-struation.
There are studies which argue men do suffer from this syndrome.  This one is from London, England. They speak with an accent there, so the information must be true.

All I'm saying is - and all I'm asking for - is a little consideration. Consider the possibility there may be more linking the genders than we think.
Allow me the possibility that when I'm out of sorts, short-tempered, grumpy and tired with a large blemish on my nose, it may be due to forces beyond my control.

Maybe, just maybe, it's my hips, and not my need for attention, that are bloated. 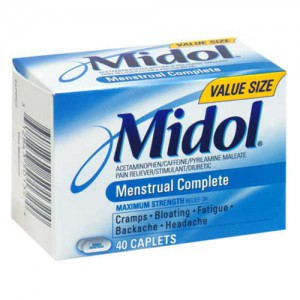 What a neat way of looking at this! I think we all have our "cycles" in a way. Plus, I think we play off of the people around us. So who knows, maybe men who are around women could be feeling empathy too ;)

I love the way you wrote this.

Oh what a superpost!!!! ;D
Gave me a great laugh... guys with PMS...don't most men would want to admit it...but there IS something to that mood cycle --- My hubby would always just blam the poor "game" from the night before. ;}

LOL!
Now I know why it's called a MENstrual cycle. Here I thought it was just because we were to make our MEN crazy during the days leading up to it. ;0

Haha. Read about biorhythms before and hey, there might just be some truth about it. Someone once told me that you can find a pattern in everything. Why should moods be any different - even for males?

I have 3 younger brothers and 5 sons...there is no way we ladies are the only ones suffering thru monthly mood swings.

That was freaking hilarious :)

LOL!! Kenny what a great post... allowing us women to consider for a moment that men too cycle! That explains it all!! Love your post.

I hear you, and I support you.
Just let me know when you're having a downwards moon swing, so I can keep a safe distance.

lol. I love reading your blog. You say it how it is, thank you! I'll have to get my husband to read it.

You are so correct. Now I just have to get my husband to read your blogs.

I think you are on to something! I know every month, I get completely tricked. I can't figure out why I'm so pissed at everything, and then duh...oh yah! There has to be something that kicks in, and makes you forget too, just like when women forget the pains of pregnancy and labor to have another. Do you think there is a definitive mid life crisis biorhythm for men?

Perfect! I knew my husband was PMSing last week! Too bad our cycles aren't synchronized like they say women's cycles will tend to do... or am I asking for Armageddon on the homefront?