Dan Zevin Discusses "Dan Gets a Minivan" (read this and you may win a copy!) 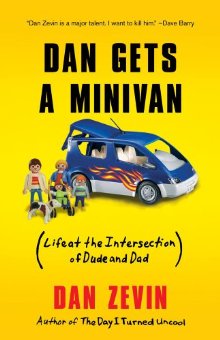 The easiest thing to say about "Dan Gets a Minivan - Life at the Intersection of Dude and Dad" is that it's funny. Because it is. Relentlessly so.

But, just as importantly, it is intelligent, sensitive and amazingly perceptive. A parent who has had their lives in any way transformed after creating little haywire facsimiles of themselves will not help but recognize their own journey at some point in this book.
Where most parent-humorists (especially men) clamber to portray themselves as incapable klutzes; Dan demonstrates a stay-at-home dad can be as hysterical and smart as he is competent.

I spoke with him yesterday:

Q: One of the things you do so well is maintain a self-deprecating sense of humor throughout the book without making yourself seem overwhelmed and incompetent (like so many daddy books do). Was this a conscious decision?

DAN: I find it amusing  that 'Mr. Mom' is supposed to be a cute term for men in primary caretaking roles but 'Mrs. Dad' would be an offensive term for women in management roles.
Lots of stay-at-home dads are really more "work-at-home" dads. It doesn't matter if you're a self-employed writer or a day trader. Parents with traditional jobs like to think you sit home in your bathrobe watching ESPN all day. Not that I don't look forward to that day.

Dan on Not Giving a Shit: 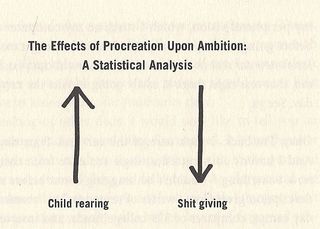 Q: The "Don't Give a Shit" chapter was particularly refreshing for me: a father of two little kids. When the idea for that came to you, was it as liberating as it sounds?

DAN: When the two of us turned into the four of us, there was no time to sleep much less give a shit about my career ambitions. Personally, the most important thing I think it takes to be a father is a sense of humor. Also cargo pants. They're like a filing system for your legs.

Dan on His Parents:
"One of the things I find most endearing about my mother is her ability to get
sicker than anyone else."

Q: I think almost any parent can relate to the pros and cons of having your in-laws help out. How did your mom react to the "she gets sicker than everyone else" line?

DAN: As a humorist, the cheapest thing to do is to make fun of people. I'm very careful to deliver the jokes with affection. My mother loves that chapter. Trust me, she taught me everything I know about being funny.

"There's a fine line between a happy, long-term couple curled up on the couch and two carcasses who've fallen asleep to the same movie they've been trying to watch for six Saturday nights in a row."

Q: What do you want people to take away from this book?

DAN: Every parent, dad or mom, tends to think nothing's going to change when we have kids, then EVERYTHING changes. I was a dude living in the coolest neighborhood in Brooklyn, now I'm a dad living in the suburbs and driving a minivan to Costco--and LOVING it, which should give you an idea of what I'm talking about. The way I see it, if life deals you a minivan, you might as well enjoy the ride.

"Dan Gets a Minivan" invites you not only to enjoy the ride, but insists you get comfortable. It offers everything a literary road trip should: laughs, music, strife and those proverbial flat tires when parents feel stranded, wondering what to do next with themselves and their kids. Dan Zevin pulls us all over and says: "cool it!" - there are worse things than following your gut and plunking yourself into a big fat car, a few longitudinal lines away from the nearest subway station.
This book reminded me I have a sense of humor, and insisted I apply it more to my parenting. It made me a better father (for the next week or so, anyway, until I morph back into my crotchety old self); it also split my sides (or as his mother might say: Ribious Crackopenus).
Intelligent, sensitive, funny. I don't think it's a man crush I have. Maybe a book crush. Either way, I understand why Dave Barry wants him dead.

Dan on Percocet:
"My surgeon implanted donor tissue. Donor tissue, In other words, "dead guy" tissue. So: who was he? Or: who was she? Holy Shit. What if I have a she-knee? What if I went in for knee surgery and came out a hermaphrodite?"
*****

All readers who comment will be entered into a draw (once I find a hat) to win a copy of Dan's book.
Contest closes Canada Day 2012 (that's July 1st, people).

If the book is as funny as the interview, it's got to be an incredibly enjoyable read!

Love it, my husband and I always discuss the where we used to be and life now with three small children.
My favorite quote: The way I see it, if life deals you a minivan, you might as well enjoy the ride.

This book sounds hilarious. A must-have!!