Kids Remind Me Snow Does More than Just Block the Driveway

Wonder Woman. Remember her?
She is a crime fighting legend with an invisible jet and brass bangles which deflect bullets.
I will safely make two assumptions about the Amazon Warrior Princess: 1) she is not a mommy; 2) she has never owned property north of the 45th parallel.
As any parent knows, while brass bangles may protect well against ammunition, they do little to prevent dirty socks and underwear from piling up. Nor will they clear the pile of spaghetti dishes or the snow blocking a parent’s escape route from the driveway. Wonder Woman could never live in Montreal; while she was gallivanting and crusading against injustice, who would shovel her walk? She’s a fair-weather superhero. I’m a suburban dad facing another Canadian winter.

Any day now, one more chore will add itself to the already mature list which includes such popular mainstays as: laundry, vacuuming, arguments over homework and piano practices, and the fight to occasionally replace Kraft Dinner with a couple of flowers of broccoli (despite the fact that, until April, these are the only flowers to be seen for kilometers).
Soon I’ll be pulling on my snow pants over my flannel pyjamas pre-dawn to head outside and shovel. Did I mention my osteopath warned me against performing any physical labour before a proper warmup? Easy for him to say; he has a snow blower.

Before the first thirty centimeters has had a chance to accumulate, the onset of winter has already started piling on the minutes needed to prepare a 5 and 7-year-old for school, with the addition of snowsuits, hats, and mittens (or, is it gloves today? Hang on, let’s argue about it). My wife says she would never live anywhere which didn’t offer the pleasures of all four seasons. I would be more than happy to oblige, as long as during the winter months we could all move into a Four Seasons. I’ll bet they have a snow blower. 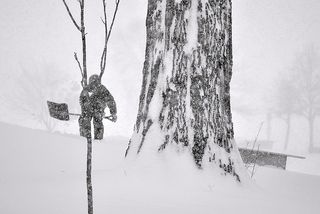 Shoveling the Approach to the Snowboard Ramp by Peter Patau

My wife once described parenting as the most intense relationship she’s ever experienced. This reflects what every parent knows: your children will be responsible for the most infuriating as well the most blissful moments in your life. This is echoed by many of our friends, who already have teenagers and children in university. They remind me constantly what a unique and special time this is - being the parents of young children, and how quickly these years will pass. I remind them they have a snow blower.
But, soon, I know my children will remind me even the Grinch eventually understood the magic of winter. They will wake up one morning and leap onto our bed in celebration of the first major snowfall - which mysteriously always seems to take place under the cover of night. They will rush to get their snow suits on and ask that I not scrape the car windows before they have a chance to etch their names into the frost. They will make me promise not to shovel more than is absolutely needed to thread our way down the driveway in the morning.
My “chore” will become their adventure after school. And what about those municipal mounds - those piles of packed snow and ice the city sculpts into the foot of my driveway the moment I put away my shovel? The kids will point out this is not a cause for nervous collapse. It is to be chipped away at, and carried piece-by-piece in the arms of these little Sherpas away from Municipal Mound and added to Awesome Mountain in the backyard.
To them, I realize, mountains of frozen water aren’t so grave. After all; for children, winter is the season of gravity: sliding on bums, tobogganing on sleighs, and the near-death experience of that first ski lesson.

I’ll never make it through this entire winter without complaining; by February I’ll be wishing we lived in Maui. Then again, in July I’ll feel oppressed by the heat, and in May my humour will be flooded by rain. Thankfully, through all that, there will be all those moments when my kids will remind me that maybe - like The Grinch - my heart is three sizes too small.
This winter they will supply all those intense moments of joy and playfulness. The most intense relationship I’ve ever experienced? Absolutely. All thanks to this little 7-year-old Superman, and - with her bangles replaced by mittens on strings - a 5-year-old Wonder Woman.