« Yeah? Well You Don't Bring Me Flowers, Either! | Main | For Parents, Time Change Means as Extra Hour of Parenting. »

That Baby-Hater is Dancing with my Baby!!

I've been married for a decade. I have a house in the suburbs. I have two children, a  lawn mower, and a whipper-snipper for the fringes of grass around my UniStone driveway.
For the second consecutive year, I've renewed our contract with the guys who clear the snow from the lip of my garage down to the sidewalk .
My life is like a Witness Protection Programme; except, it's a life I chose, and I'm happy here (especially since signing the snow-clearing contract) .

At my sister's wedding on Sunday I was chatting with one of her closest friends; she asked if I had read her article published on The Scrib: "Confessions of a Baby Hater".
Annie is my age, and has also been married for ten years.  She has about fourteen dogs (OK, she has two or three dogs. But, to those of us with no canine family members more than one dog equates to exponentially excessive quantities of hair, drool, and nasty breath), but no children.
I always wondered why. Now, after reading her post, I know why: she never wanted them.
Imagine!
We parents always wonder why D.I.N.K.s (Double Income No Kids) don't have children. It's really none of our business; but, as Annie points out in her post, that doesn't stop people:

I think, secretly, parents are infinitely curious about childless couples because there are Mommies and Daddies who would have made different choices, but felt trapped. As the "Baby-Hater" points out - the statistics don't support our version of 'happily ever-after':

Entering full-blown adulthood, it started to become evident that most people were following some kind of a “life” roadmap. Get married by 25, buy a house at 27, have the first of 2.3 children shortly thereafter. 50% to get divorced at 35.

Having a failed marriage does not mean one wishes they never had children. However, I've heard many parents who share custody and treat their weekend with the kids as an inconvenience.
My point is: there is no right or wrong when it comes to choosing whether to have children. There are plenty of parents who should never have had children - just ask their kids. There are also bushels of D.I.N.K.s whose tenderness, selflessness, empathy and maturity would make them natural mothers and fathers. The fact that they choose not to have offspring is no shame; those people improve the planet simply by being decent human beings.

When I'm with D.I.N.Ks, I become sensitive about their space and how my kids may be infringing upon it (something I wish more dog owners would do). If they wanted to have kids, but were unable to, I don't want my children to trigger unhappy memories. If they, like Annie and her Husband, made a choice to remain childless, it may be because they would rather not have little monkeys like mine climbing into their laps, asking for rides on their feet, or sharing their French fries.
So, at a wedding with Annie - the Baby-Hating blog writer - and her husband, I felt protective of their privacy. They didn't want children. They certainly didn't want mine.

My perspective changed once Annie and my 5-year-old daughter hit the dance floor.
The two of them developed instant chemistry as they let their "Backbone Slide", and "Ice-Ice Baby"'ed. My daughter romped as Annie stomped. They grabbed hands and made each other nauseous as they twirled around the center of the bar.
It was clear the two ladies - 32 years apart - shared a kinship. They are both confident, sure about their choices, and make no apologies for non-conformity.
Annie doesn't hate kids. She hates annoying kids. On that point, she and I agree - especially since chronic annoyingness in children is usually borne of similar traits in their parents (thankfully, my kids' formalwear  managed to disguise that part of themselves during the wedding). She also hates being frowned at for sculpting a lifestyle which includes adult time, HBO at 8pm, and dependants who only need to be fed, walked, brushed, and have their poop fall onto a sidewalk instead of into a diaper. 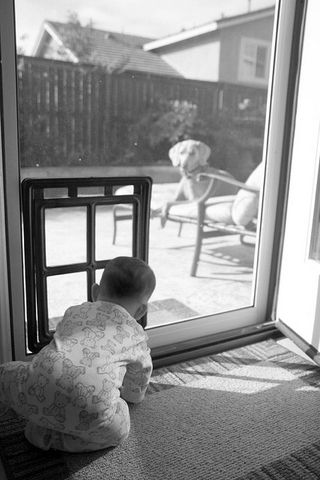 No Babies Allowed - by mil8

Annie left the party at 1:30am. She had to work the next day.
I left at 11pm. I had to work just to carry the kids to the car.
She gets to party for an extra ninety minutes; I don't have to scoop s*** into a bag or vacuum my couch. Everybody's happy; especially my daughter who danced the night away with a baby-hater.

Posted at 08:16 AM in Life Before Kids, Marriage & Relationships, Parenting | Permalink

Brilliant! The only thing missing is indication of the sardonic fact that your 'baby-hating-dog-loving' sister's wedding was to a man with 2 kids!!!

That wasn't missing so much as omitted...I didn't want to share too much of your business:)

Tell Annie I'm on her side with no kids too! I don't have pets though. To me pets would be like really difficult and needy kids, that make you feel guilty all day. I love her response, and will use it, even though asking me about having babies in my 40's is getting pretty ridiculous at this point, and they all know I've already raised 4 step-daughters. Maybe being the oldest girl of 7 kids also had an impact, but I love, love my empty nest so, so much!! No guilt either.

The message has been passed along:) Thanks for reading!