« Can Men Be Romanced on Valentine's Day? | Main | Don't a Parenting Blogger's Kids Have a Right to Privacy? »

As much as I (sometimes) miss my children's infant and toddler stages; occasionally I'll be reminded of parenting roadblocks I'm thrilled to have in my rear-view mirror. Potty training is one of them.
I thank fellow-writer Michael Bahler for reminding me of the work, and second-guessing, involved in getting your kid to commit to underwear:

MICHAEL: Kenny, my three year old is behind in potty training and my wife wants to introduce special pull ups that will freeze his privates off every time he urinates -- the Clockwork Orange approach to potty training. I believe this is both unethical and lazy. I'm thinking of starting a petition to ban the practice. Is this legal in Canada?


KENNY: Hi Michael. I can’t imagine freezing your privates is illegal north of the 49th parallel; arrests would skyrocket between November and April.
I don’t know if your wife is aware, but latest research shows potty training is purely physiological; his brain will one day wake him up and tell him to go to the washroom. Neither your wife, nor Mr. Freeze diapers can change that. Maybe it’s genetic. Were you or your wife late bloomers in this department?

MICHAEL: My father likes to tell the story about how he let me roam around my childhood apartment in the buff but said “don’t crap on the carpet.” I wound up going one inch from the carpet and he was happy -- because I’d listened to him. I don’t know if that makes me a late bloomer. Let me get this straight, Kenny. Are you saying  that there is no such thing as potty training? That kids will choose when to ditch the diapers based solely on their own rhythms and we as parents are powerless to affect the process? That it’s all propaganda? Really?

KENNY: First, that story makes you precocious, not a late-bloomer. Not only did your body recognize when it needed to relieve itself, you were at the same time able to absorb the concept of valuable imported carpeting.
Second, as far as potty-training “propaganda”, I would use the term “misinformation” in it’s place, even though it really is propaganda disseminated by diaper companies. Proof of bladder control development (BCD?) being nothing more than a waiting game can be found here, and here, and here. Each of those links will show your wife, that in a nutshell, freezing testicles will NOT induce potty training.
If you can convince her a diaper full of ice cubes doesn’t work, would you be willing to do the night shift bed-changes? Maybe she just likes her sleep. 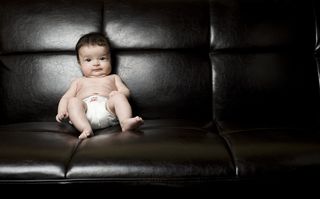 MICHAEL: I’m typing with gasoline-slicked fingers because I’ve started a big bonfire on my front lawn for all our potty training self-help manuals. Goodbye “Diaper Free Baby.” Good riddance! Now that they’re ablaze, I’m thinking maybe I should have tried to resell them on eBay. I agree with you on this and I don’t. I agree that kids will naturally move away from diapers as they get older, but I also think “assertive” parenting can speed up the process. My wife has a mommy friend with a mean streak and her kid was the first one out of diapers -- I don’t think this is a coincidence -- or biology!  And re sleep, yes, I’m willing to forgo it if it means my kid won’t have to wear torture chamber pullups. I’m selfless like that. Does everything revolve around sleep? I understand and appreciate it’s importance, but I think “lack of sleep” is too easy an excuse to justify every parental failing. Surely, you agree with me on this, Kenny?

KENNY: I’ll assume “Dangers of Book-Burning and Its Detrimental Effects on Young Children” wasn’t in that pile.
Back to diapers.
It’s important to differentiate the arguments between ‘making through the night dry’ - which is involuntary; and ‘my kid is so comfortable in his super-duper absorbent underwear, he’s too lazy to walk to the bathroom.’ In the latter case, yes, parental encouragement is necessary. In fact, not to come full circle in favor of your wife, there is something to be said for cold testees making it worth your son’s while to go sit on the potty. I regret this point might have been made clearly in one of those books.
And, yes, everything does revolve around sleep. You have just one kid, right? 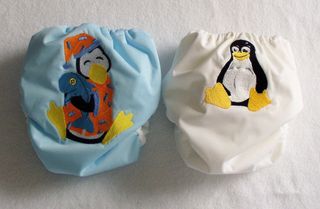 MICHAEL: I have two kids, thank you very much -- ages 3 and 1. All I’m saying is that when weighing the morality of freezer pullups, sleep shouldn’t enter into the discussion. The fact that I’m dog tired doesn’t make them any more ethical. And twenty years from now, I don’t think I’m going to get much traction by telling my eldest: “You have to remember, son, I hadn’t gotten much sleep.”  So be nice to your kids! No matter how tired you are.

KENNY: Two kids...3 and 1, eh?
OK, here’s what going to happen: Everyone has told you “You’re in the thick of it; it’ll only get easier.” Five years later, I realize that’s not true. Diaper maintenance has been replaced by baking for Scout meetings; pee on the floor has been replaced with “Build a Volcano!” experiments gone wrong.
I always intend to be nice to my kids, but scraping icing and fake volcano stains out the carpet can really try your patience.
You’ll also discover that while you’re fighting the good frozen testicle fight on behalf of your eldest; for your second, you’ll laugh that you ever cared so much. You’ll go get your own ice pack out of the freezer if it means not leaving a restaurant table and spending 20 minutes in a bathroom stall waiting to reward your child for going poo.
Your wife’s got the right idea.

****
Michael Bahler is a writer living in New Jersey and the father of two little boys. His work has appeared in the N.Y. Times ("In Defense of the Doormat Dad" & "I Measured My Commitment in Carats"), Glimmer Train, the Best of the Web 2008 ("The Stiff Jew"), Jewcy ("How I Learned to Stop Worrying and Like the Mohel"); The Brooklyn Rail ("Searching for My Ex-Girlfriend's Nose"); nerve ("Stephanie's Blood"); and Eclectica ("Virgin Annie").

Holy crap. This was fun!

Thanks! (and the play-on-words is not lost; unless it was unintended).