« Customer Service Done Right: Two Nights at the Delta Ottawa City Centre | Main | Join the #WeAreParents Nation, and 'Know What It's Like.' »

When I think of some of the common challenges of parenting, they often include:

My son is 8, and if there was ever a children's book which would help me through some of those challenges, it's L.A. Messina's "Henry & the Incredibly Incorrigible, Inconveniently Intelligent Smart Human." 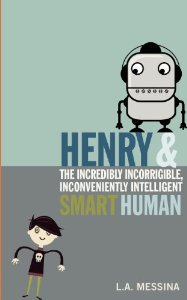 In many ways, it's a simple morality tale: on a planet populated by robots, humans are the labor-pets of the family. They are slack-jawed, lazy-eyed, monotonous beings manufactured to carry out the bidding of the robot population.
Henry, a robot who is one week removed from his "thirteenth upgrade", is part of a family who has just been given a new-model human: the ETC-420-gx-2. Their job is to put this new model through its paces and ensure it functions as expected.
What follows is a tale of bonding and adventure between two young adults; one robot, one human.
A parent could easily lean on this book's imagination, metaphors, hysterical use of language, and voyage of discovery to learn much of themselves, as well as of their child.

Despite the young adult target, my little guy became instantly attracted to the two central characters. During our phone conversation, Lynn Messina offered her opinion of the story's wide appeal:

"It works on so many different levels, ....there's the story, and then there are all of those analogies to real life...between us and our computers; the inversions of us and the machines. That's a rabbit hole that, if you're older, you can kind of enjoy going down."
"I went to see Wall-E, and was watching those first 20 minutes where there was kind of this opera of him on the planet alone. I thought 'what can I do to this formula to make it different?And I thought 'I can invert it. I can make everything opposite day.'"

Wall-E: lonely, timid, yearning for friendship, and forced out his comfort zone hoping to be rewarded.
That's one reason this book works so well: those are emotions which translate, regardless of age.
It does not put extraordinary pressure on the main character to be a hero, in fact, this family's robot father is chosen to take care of this particular human because he has "...distinguished yourself with your overwhelming averageness."
No pressure.

The language in the book can be challenging. Young readers - as well as us older folks - have our brains tossed into to a bit of a wrestling match. But, like play-fighting with a sibling on a carpet, the tussle itself is part of the fun: "Jane pulled her car into the driveway behind her husband's Esperzo 2167 3/4 sedanmobile..."
The language also manages to describe certain human conditions in a way that perhaps our daily language should: "Fainting was a fail-safe built into the human's system to prevent cases of berserkoness..." 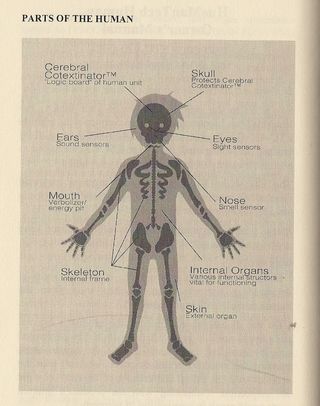 The storytelling also touches on themes common to any reader; but especially young ones: being picked last on the team, and isolation, and loneliness.

But the emotion is softened as we observe a human boy through the eyes of his robot companion, Henry. Henry doesn't watch his friend cry; but rather sees that: "Droplets of water fell from its light sensors."
Whether read allowed to your grade-school children,  or alone as a young adult, discussing Henry and 'ETC's' missteps can be a gateway to a better understanding of young-adult life; as well as teach kids a thing or two  about their parents' own moments of irrationality: "Problem: Your units eyes are dripping and it emits a high-frequency whining from its mouth. Likely cause: Your unit is depressed, an emotionality condition that can last anywhere from two minutes to twenty years."

Although touching on topics such as having a friend who is a bad influence, or that jolting moment when your son shows up with a tattoo, this really winds up into a classic hero tale.
The author explains:

"It was always a hero quest, because in my mind I don't know any other kind of story....some kind of underdog kid who overcomes something and achieves a great goal."

The book's greatest lessons are woven into poignant and funny sentences which come up for air every couple of pages. How better to summarize humanity than:

Observe caution when handling. Humans may leak or explode if improperly handled. To prevent crying jags and fits of anger, treat with kindness."

What's left to say after that, except: "Good night; we'll read more tomorrow."
The robots in this story understand us better than we do ourselves. But, through reading it, we can catch up a little.