« Welcome to the Parent Club. Now, Have a Seat! | Main | "Family Matters" Radio Column: Speed Dating your Spouse, Should Kids Referee Themselves & Is Your Child Too Young for That Show? »

"Here, hold this!" he said as he stomped back over small dunes of dried lake weed and neighborhood refuse.
It was a fishing lure; its hooks rusted, dangerous, and congested with pieces of old small-gauge line. Despite its resemblance to Little Mermaid's Flounder, this treasure my 8-year-old had plucked from the St. Lawrence River only made be worry about the diseases we would all contract after bringing it home.
But, to him, it was awesome.

"Mommy, you hold this. Make sure it doesn't fly awaaayy!" she said, her arms flapping in imitation of the Gull who had left his feather for her to find.
My wife looked at this quill: grey and white and black; matted and dirty after days, or weeks, or months floating past the municipal shore lines of Montreal's southern shore.
Gross to Mom and Dad, absolutely thrilling to their 6-year-old daughter. 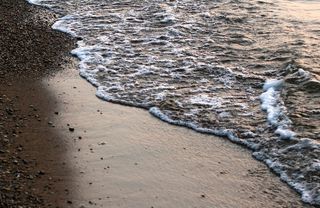 It was 6:30 on a Friday night. We had just completed a family supper at a local pub (yes, they had a kids menu; yes, my kids each had a sip from my pint).
After dinner, doggy bag in hand (I suppose, since we don't have a dog, it's really just a bag of leftovers), we walked down a side street to stand alongside the water at low tide. The dried remnants of what normally shifts and floats beneath the high tide was left behind for a few hours, to be picked up again once the cycle continued.

Our kids are at a great age. They are far enough removed from the pre-school stage of not being able to sit at a dinner table for ten minutes without throwing a spoon across the room, yet also years away from the cynical teenage years during which they will simply want us to leave them alone.
For now, they hopped and skipped from their parents to the waterline and back, sharing observations, and dropping treasures at our feet.
"As gross as this rusty fishing lure, and e-coli laden feather are, we should remind ourselves how lucky we are that they want to share this stuff with us at all." I said to my wife.
"I know." she answered. "Soon, their allegiances will shift. We'll be out, their friends will be in."

We reminded ourselves that this period in our children's lives is fleeting - as are all stages of life - while we collected that evening's cache to return to the car: a rusty lure, leftover poutine in a brown paper bag, a dirty feather, and an orange rock.
At some point, while skipping along the sidewalk, my daughter lost the stone. Despite backtracking with Mom in a serpentine search pattern, the rock was gone for good.
Somehow, during the four minutes she was the stone's keeper, my daughter had become so emotionally attached to it, she was extremely distraught at the thought of leaving it behind.
Her solution was to leave a note for Santa in front of the fire place at home.
Sure, Santa usually only comes at Christmastime, but maybe he would make a special trip 'cause he knows I loved the rock, she argued.
You can always try, I said - fighting my urge to quash the fantasy. 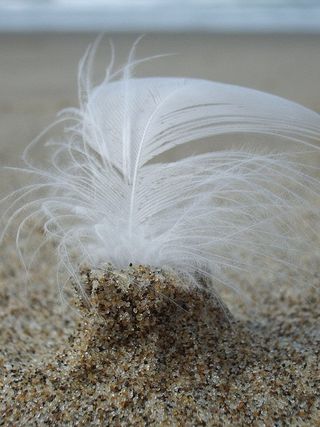 At home, we washed the lure (carefully. Boy, those hooks are sharp!); rinsed the feather, and parked the poutine next to the yogurt in the fridge.
The kids were still in bed early enough for my wife and I to stick our feet under a blanket and treat ourselves to a movie.
"She's gonna be really disappointed in the morning when Santa doesn't show up."

Yeah, but being disappointed because you believe in the impossible is what makes 6-years-old a beautiful thing.
Reminding ourselves of all that is impossible is part of what makes getting older a little ugly.
My wife and I show signs of rust, and occasional sharps edges after of years weathering the tide. Yet, we remind ourselves how lucky we are that, to our kids, time with their parents is still something to treasure.

Posted at 11:00 AM in Getting Old, Parenting | Permalink