« "Family Matters" Radio Column: Forgiving Your Spouse; Free From T.V. Means Free From Stress; The Importance of Teaching Your Kids to 'Go Away'. | Main | Why Am I The Problem Because I Hate Being Late? »

No, Men Don't Get Pregnant, Too. But Some of the Symptoms Are There.

Men Get Pregnant, Too.

Of course, during gestation, there are certain symptoms familiar to expectant mothers which men will never experience:

We will never push a watermelon though a pigeonhole.

We acknowledge this without being told. Despite that acknowledgement – and tacit truism – we are nonetheless constantly reminded of our physical and biological shortcomings.

We are reminded of it when we complain of fatigue during the onset of pneumonia; or when we wince at the pain of a sprained limb; or after we nap an afternoon away while battling a headache.
The reminders of our inability to bear children surface most often, and most poignantly, when, as expectant fathers, we attempt to share our own emotional worries and physical discomforts.

During my wife’s pregnancies - especially her first – outlets though which I could freely express emotional insecurity, self-doubt, and stress-induced physical discomfort were few.
Internally, I questioned constantly my right and ability to become a nurturing, capable father. I at times felt stress and imbalance as I struggled to find my own place as an expectant parent alongside my wife, who had the benefit of physically carrying the child. I mostly stayed silent when phantom symptoms such as nausea, headaches, and muscle pain crept though my body – mysteriously
moments after my wife complained of similar ailments.

I was nervous about wrestling with fatigue through a full-time work schedule; night feedings; and being emotionally available, positive, and supportive of my spouse.

Ironically, this mother-to-be, who had the greatest cause to wish I’d shut up, was my most
dependable and understanding supporter. It was other motherswho scorned: “Yeah? Try pushing a
watermelon through a pigeon hole”.

It was an attack for which there was no defense; nor will there ever be. 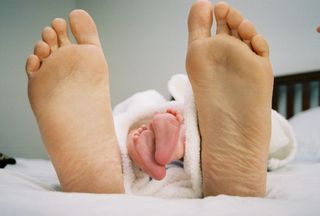 Father and Son by Benjamin Gettinger

The irony is, those “watermelon” statements only encourage shame in a man, which, in turn, discourages communication from a husband-to-be attempting to be an organic part of the pregnancy, birthing, and parenting process.

Physical and emotional pain is not a zero-sum game.
A dad-in-waiting’s aches, pains, and worries need not come at the expense of a pregnant woman’s discomfort; nor are they intended to.

Women’s “watermelon” attacks are almost exclusively directed at men. When a childless woman complains of her chest cold, she is never told by a mother: “Oh, yeah? Try having a baby.”

Why? Because the statement is inherently cruel and unfair; and perhaps also because women are better adapted to emotionally defend themselves to other women. The backlash of such a statement directed at a childless girlfriend would be too severe: most likely resulting with at least a temporary halt to the friendship. As for men; we merely chuckle in response, and clam up.

Perhaps men need to better develop a language for their emotional defense, as well as insist upon understanding, acknowledgement, and acceptance of their weaknesses.
But, to do that, we need to feel safe while expressing vulnerability. The “watermelon” attack negates that.
It’s a new ‘chicken and the egg’ scenario. Only this time; it’s a baby in a womb.