HBO's "The Newsroom" is smartly written. Its Writer/Creator Aaron Sorkin understands how to back-load this political bus just enough so it doesn't fall off the cliff.
His show's news anchor skewers extreme right-wing ideals as well as the Tea Party members who espouse them, but as a card-carrying member of the Republican Party he gets away with it more than even a fictional newsman normally would.
The series' female characters are strong, intelligent, and assume leadership roles; its male counterparts are sensitive and are as personally fragile as they are passionate about defending women's rights and those of minorities and the disenfranchised.

This past week's episode socked some of that credibility and self-righteousness in the gut. 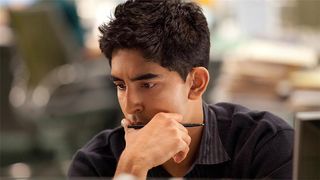 In episode 5, Dev Patel's character - Neal Sampat - has a verbal confrontation with a female member of the Occupy Wall Street movement. The argument is terminated when she punches him in the stomach, leaving him in a fetal position in a studio hallway.

In that scene, the show, whose moral compass rarely allows evil doers to get away with anything, got away with something.

Imagine a similar scene with sexual role-reversal: A female staffer argues with a male member of fill-in-the-blank. At the climax of the argument, when anger and frustration cloud his ability to continue jousting verbally, he curls his fist and punches her.
That would, at a minimum, require its own storyline, fleshed out until the abuser received justice.
Thankfully, the victim of this past week's abuse was a man, so a chuckle and a "Wow. Strong scene." suffices.

I am not naive, nor am I a prude. I understand dramatic effect, and my sense of humor is a useful enough filter to understand the intention behind that hallway scene.
While real life violence against a defenseless individual is inexcusable, a woman socking a guy in the gut within a fictional television series does not carry with it the same connotation or history as watching a man punch a woman - even for dramatic effect.
But, should that forgive it?

As an adolescent, I was a wisecracker. I would often flirt through harmless teasing. In retaliation, the girls would often flirt back - with a firm slap on the shoulder or leg.
Even in adulthood a woman slapping a man on the arm is considered a good-natured response to good-natured mockery.
Is it wrong?
I believe in balanced and fair evaluation; in putting things into context; in not overreacting.
But, I also find it useful to stoke healthy debates with female friends about how certain situations would not be permissible were the sexual roles reversed.
This punch is one such situation.

I wouldn't want the scene written out, necessarily. I also wouldn't want him to physically retaliate. But, on a T.V. drama so charged with posturing, political correctness, and one also possessing such a sharp moral compass, I would like to see acknowledgement of the abuse written into the language.
During his scene with this abusing member of OWS later in the episode, Will McAvoy apologized to her for deriving too much enjoyment from belittling her during their earlier on-camera interview. Perhaps he should have punctuated that apology with a verbal jibe:

"I apologize for that. But if you ever touch a member of my staff again, so help me I'll prosecute you for battery. Take care."

Regardless of sex, acknowledge the battery. Speak out.
I would have like to have seen that.
It may remind our sons the same rules of protection apply to them as to our daughters.
But, for now, men being slapped on television still has a "Three Stooges" appeal.
Funny.

Unfortunately, society still looks at a man getting hit as "he deserved it", but looks at women getting hit as a problem. They should both be problems. There are commercials every year that show a man being hit by a woman, but rarely (I think I only recall one from a couple of years back) where it's okay for a man to hit a woman - and it'd BETTER be in complete hyperbole so it's understood that it's nothing personal and a complete unreality. But the reality we're being sold is that it's okay for women to hit men. And that's based on the idea that women are the lesser, right? If women are lesser, then it's okay for them to hit a man because what damage could they do? Well, a lot. You can't start to qualify what is a good hit or a bad hit - or in which relationships women could hit their men because of a size difference. It's an ugly topic.

Thanks for writing about this. We need to keep talking about it until people being hit for laughs or drama on television isn't a thing anymore.