Now Available in Paperback! Men Get Pregnant, Too (despite never pushing a watermelon through a pigeonhole)

"Men Get Pregnant, Too
(despite never pushing a watermelon through a pigeonhole)"
is a page turner which will surely ignite conversations within couples who have--or are ever planning-- on having children. This is a book which treats both motherhood and fatherhood with depth and respect. The perfect gift! (see description below.)

Available in paperback and for Kindle at: Amazon.com  & Amazon.ca

Also available as an ebook dowload at: 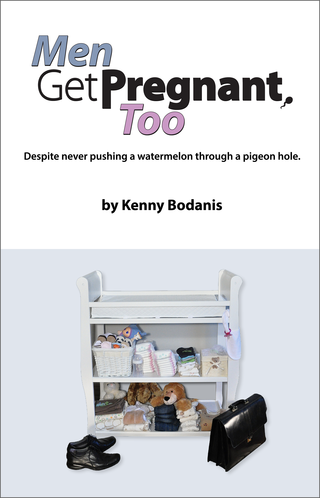 Men Get Pregnant, Too (despite never pushing a watermelon through a pigeonhole):

They received an Early Pregnancy Test as a wedding gift. Subtle. But, this couple wasn't even sure they wanted to be parents. How to tell their mothers and fathers they may never become grandmas and grandpas was just the first of many hurdles on the journey towards eventual parenthood.

Once the baby was on its way (after an 18-month long attempt at conception), the father-to-be quickly becomes a secondary player in the process. While his wife is experiencing morning sickness, medical scares and migraines, the dad-in-waiting wrestles to find his own voice.
Are these phantom symptoms real, or imagined? Can he express his own worries about whether he will be a good father? Or voice his concerns about the surprising results of a genetic test? Does he HAVE to help organize his own baby shower?

Men Get Pregnant, Too is a rare gem. It treats both motherhood and fatherhood with equal respect, while challenging couples to re-examine a father-to-be's role and his voice throughout pregnancy.
It is a must-read for any couple who has--or is planning on having--children (and having to deal with their relatives, too!).
From intimate conversations about infertility, health, in-laws, medical emergencies, and balancing a full-time job with a role as butler to visitors, MGPT is guaranteed to start a new debate among a new generation of parents.

I am totally for men being fully involved in parenting! Unfortunately that is not often the case... even now in 2014.

I am proud (and grateful) that my husband takes is father role as seriously as I take my mother role. :-)