« BMO Turns a Soccer Cheer Into a Road Trip for the Whole Team | Main | On BT Montreal: How to Reduce the Arguing Over Homework »

The following is a fictional short story I submitted for the Quebec Writers' Federation Short Story Competition. Apparently, it made the first cut but did not qualify among the ten finalist. Following my story's elimination from competition, I was struck by two ideas: 1) Brene Brown and the idea of Daring Greatly, and 2) Remembering I began a blog specifically for the freedom to publish what I want, when I want. So, here is the submission.
Thank you for reading.

The pill was on the table’s centre dot. The red dot. It was fifteen dots from the left edge, fifteen dots from the right, fifteen from the bottom, fifteen from the top.
Centered.
Equidistant.
Measured.
The table itself was twenty-two inches square. She measured it each Wednesday at 6pm before setting her dinner plate upon it.
Other than the fifty-seven blue dots - and the one red one - the table was featureless white melamine, supported by hollow reflective aluminum legs.
The table was not identified as being the product of any particular manufacturer.

Unlike the table, the pill was identified.
Clorazil.
The ‘C’ began at the pill’s eight o’clock position and continued to spell the drug’s brand name along its circumference until coming to an end with the second ‘L’ at the four o’clock position.
It was small – one hundred milligrams worth.
She had taken two others that day, as she had done for the past twenty-two years, four months and thirteen days. One at 6am, another at 2pm, and her final daily dose at 10pm. A twenty-four hour day, equally divided into three by one-hundred milligrams worth of anti-psychotic.
It was her 10pm dose which currently covered most of the table’s only red dot. Eight hours earlier, she had swallowed the last chalky, white, stale pill she ever intended to digest.
It was 9:58pm. Once the green colon, which separated the hours from the minutes on her clock radio, blinked eighty-one more times, it would be 10:01pm; she would officially be overdue for her meds. And overdue she would stay.

Cheryl was diagnosed with schizophrenia when she was twenty-four. Symptoms began tapping her shoulder and sharing her space when she was sixteen.
The first apparition was that of an odd reflection in her bedroom window.
The reflection was a man’s face. He was old. His hair was grey and thin, reaching unevenly over his ears and gradually disappearing from his crown. His left eye was blue, his right was black.
His whispered to her, this man reflecting outside her second story window.
“You will visit.” He said.
“Visit where?” She whispered in return, aware she was not alone in the house and could be overheard through her thin walls.
“Far.” He answered.
“I don’t understand.” She tilted her head and squinted as she strained not only to hear, but also as much to understand, his message.
“Far. He repeated, and then the image faded. 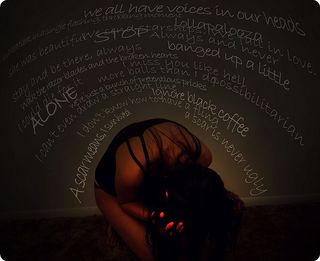 She stood mesmerized for a short while, and then became distracted by the accumulation of dust on her baseboard heater. She removed the can of Lysol from its shelf, and, using the rag which had dried nicely since yesterday’s cleaning, proceeded to remove the tenacious lint.

That was the first of many visits from the old man, and he was the first of many visitors.
He, in particular, seemed content to speak to her through her window at night.
His voiced pierced even through the worst of the regular screaming emanating from her parents’ bedroom, which shared a wall with her own. He would sometimes come to her before their conflicts, often during, and occasionally only once there were no sounds to be heard other than a door slamming or silent sobbing.
Cheryl enjoyed the man’s company.
This was not the case with all those who visited her.

Marsha’s voice became more persistent as Cheryl attempted to remain focused on her twelfth grade English lectures. Marsha couldn’t bear the classroom boredom and would taunt Cheryl relentlessly. Eventually, Cheryl spent those fifty-minute periods on a bench facing a monument in the park across the street from the school.

Michael only spoke to her at night.
He tormented her with abstract questions she did not understand and was therefore unable to answer:
“Where are they?” Where are who!?
“Why don’t you go there?” Where??
“We are too old…” Who is? Too old for what?
Cheryl eventually became fearful of overnight hours, relying on caffeine pills and network reruns of old films to accompany her until morning.
Her fifty-minute mediation sessions on the park bench eventually became afternoons asleep in a nearby field.

Torrence finally broke her.
He would not only inhabit her thoughts, but somehow had the ability to assume the form of objects as she passed them – a fire hydrant which seemed to turn towards her as she passed; a tree branched which protested as she ducked under it; an orange and black sandwich board at a construction site which screamed “Not here!!” just prior to falling in her path.

Eventually, she found no peace. Between her parents’ relentless conflicts and the bombardment of suggestions and commandments being hurled at her elsewhere, Cheryl imploded.
It was then she resorted to what everyone now refers to as “The Attempt”.
She remembered nothing of it.

There was no recollection of the ambulance; or the tubes; or the chalk in her stomach.
All she understood now was the fog she has been in since “The Attempt.”
People addressed her differently now…and much more infrequently.
It was just as well, since she was so consistently tired.
The Old Man, and Marsha, and Michael, and Torrence were all gone now. Along with them went anything else that was at one time vivid: her friends’ voices, music from her record player, and her will to engage.
She still slept during the day, in a recliner which felt more comfortable than her bed. She didn’t know whether nighttime wakefulness was the result of a habit formed years earlier - before The Attempt - or a side effect of her new body chemistry created thanks to Abilify,  and then Geodon, and finally Clorazil.
All these pills.
Magical.
No more voices. Only a quiet fog, and a two dozen extra pounds, and a small apartment with a melamine table. She was hardly ever disturbed by anyone anymore. Her mother called her every other day.
“How are you?” She would ask. “Just hope you’re doing well.” No more Attempts. Right?
Her father followed up the first week of every month; Cheryl was convinced turning the page on his calendar reminded him they hadn’t spoken.
“Hi.” He would always being. “Just calling to say hi…” Please, no more Attempts.

Most others avoided her, which was fine.
She didn’t mind the lack of attention, and didn’t care to answer banal questions.
Alone for nearly two decades, there was only one thing she missed; the voices.
They had left her before she had really understood them.
What became of Torrence after her Attempt?
Was he speaking to others?
Was Marsha still occupying the back row of her old 12th grade classroom?
Cheryl was curious.
And alone.

With the spoon in her right hand, she pressed down on the Clorazil tablet.
She slowly increased the pressure until in crushed.
10:01 pm.
She inhaled deeply, and blew the anti-psychotic dust off the table, watching it scatter among the dust particles within her small living room.

Then, she waited.
Not for the phone to ring.
Not for her friends to knock on her door.
But rather for those voices to provide some company once again.
She waited for someone to talk to.