« Dad Asks: Will the Super Bowl Halftime Show be Family Viewing? | Main | On BT Montreal: Being a Working Parent with a Sick Child »

Suicide and Men at Risk, Part 2 - A Conversation with Dr. Sally Spencer-Thomas

During the first part of my conversation with Dr. Sally Spencer-Thomas, psychologist and CEO & co-founder of the Carson J. Spencer Foundation (CarsonJSpencer.org), we discussed the support systems fail men who are at risk of taking their own lives.
One of the many reasons these victims of often undiagnosed mental illness continue to suffer is because they fail to feel a connection with available resources. They are worried that if they call a 1-800 number provided to them through work (if they're lucky enough to have an employer who provides one) they will be met with the same skepticism they encounter when they discuss their feelings of frustration, fatigue, and anger with their social circle.

Dr. Spencer-Thomas and her organisation have taken the unusual step of surveying members of high-risk categories (working-age males in high-stress jobs who suffer from an undiagnosed mental illness) about what they feel is lacking from conventional treatment options.

We asked a number of men that we considered double jeopardy men - men with a number of risk factors who were not going to seek care on their own - what would work for them; what would reach them?
What they told us they wanted was humor.
There was certainly evidence from some other campaigns that used humor to touch some of the social barriers around difficult topics. A number of men had told us that dark humor is the way we get around a lot of difficult things. We tried to strike a balance of how to make it fun, but not offending. 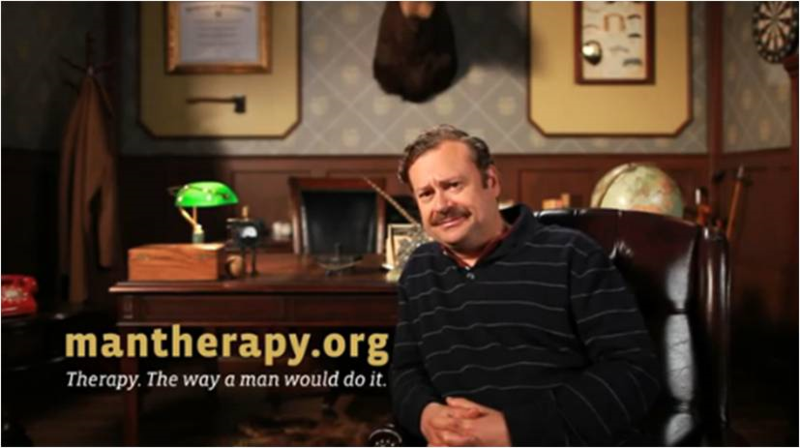 The foundation needed a vehicle which would be taken seriously. But they also needed a portal which was welcoming; one which users could share with friends who would understand the appeal of seeking help from this interface in the first place.
Naturally, the challenge was to create a resource which could integrate humor into therapy offered for such distressing conditions as bi-polar disorder and depression.
The Carson J. Spencer Foundation teamed up with the Colorado Department of Health & Environment and Cactus - an ad agency in Denver - to create ManTherapy.org

They created a character called Dr. Rich Mahogany. He is a man who talks about mental health in a way that our double-jeopardy men can relate to, and they pass it on to each other. It really takes the things that we know about mental health and translates them to a tone and a language and a format that can reach these men who can be very challenging to find and to benefit.

At ManTherapy.org's homepage, the actor portraying Dr. Mahogany brings an immediate grin to the face of any web-surfer. He is a robust character; that next-door-neighbor type who never misses a chance to yell "Good Morning!" to you in his boxer shorts as you hurriedly scramble to your car in the morning, while also being the kind of guy you could pass hours with sitting on your front porch.
What is also notable on the homepage are the buttons which let you instantly - and anonymously -  access the National Suicide Prevention Lifeline (1-800-273-8255) as well as the Veteran's Crisis Line.
Rich will also guide you to information on "Gentlemental Health" and Man FAQ's about Depression, Anxiety, Anger & Rage, and Substance Abuse.

But Dr. Mahogany's real goal is to encourage men to dig a little deeper.

When you get to ManTherapy.org, Dr. Mahogany welcomes you in, and you can fill out an 18-point header section, which is based on actual standardized tools for screening depression, anger, and anxiety which quickly evaluates for the person taking it - how bad is it? Most of the people who access the online tool are people who need help in that moment but a lot of the time it’s the people surrounding them who are worried about them, and we also encourage them to take this training tool.

Even the questionnaire is created with humor. The header above the first question "Tell Me About Your Sleep Habits" reads: "Did you know koalas sleep eighteen hours a day? Lazy Bastards."
Who wouldn't want to move on the next question?

Once the eighteen multiple-choice questions have been answered (it took me less than ten minutes), Dr. Mahogany gives you a quick oral evaluation - speaking to you directly. The screen then reveals an official piece of paper (I know it is one, because it says "Official Piece of Paper" at the top) which can be printed. This contains a written evaluation as well as a percentage score in several key categories. It also immediately provides links for support (there is also a free search function to access a therapist near you). The idea is, Dr. Spencer-Thomas explained, that people will print this report and use it as a tool if they decide to seek help from an outside source. The site has been a tremendous success, but it has also highlighted how great the need is for support of this type.

We’ve had almost 500,000 people visit the website. The average time spent on the site is 6 minutes, which is an eternity.
Our organization has been doing quite a bit of work with the first responder community and fire fighters and law enforcement. Obviously they’re not all men, but the vast majority are men. They have been asking “Can we have a fire service version of this, or a police version of this?” Also, with the veterans' community, they’re looking for more of a warrior angle, because soldiers have specific needs.
So we are looking for additional funding which will target those specific populations. When we did our evaluations after the first 18 months, we asked people "What would you change? What is your favorite thing?" They said “We want more. Can you make one for gay men? Can you make one for women?” And we answer them by saying "Sure! Can you help us find some funding?"

Where healthcare is concerned, financing is always a challenge. However, specifically when talking about the challenges of dealing with mental health, stigma may still be the greatest obstacle.
Too often people who suffer from depression or bi-polar disorder are left to wrestle their own demons and turn to self-medication through drugs or alcohol.
Dr. Rich Mahogany is a welcome resource with a patient ear and an encouraging voice. One can only hope he can become an example for the individuals, families and friends of those who feel they have nowhere to turn.

Posted at 11:46 AM in Interviews & Issues, Medical, Stereotypes | Permalink