Study Shows Organized Sport is Not for Every Child

Yesterday, I was on CJAD's Barry Morgan Show discussing this article, printed in the Washington Post.
The article juxtaposed two points of view: the first extolling the benefits of organized sports—almost to the point of proving they are mandatory for any child's well-being; the second putting the emphasis on emotional balance being the key predictor of a child's future success.

As I mention during the interview (see link below), reading about this latter point of view—supported by a Yale Center for Emotional Intelligence study—provided me with tremendous relief.
Despite being a "parenting blogger," I have rarely, in recent years, divulged much personal information about my children. They are 11 and 9-years-old respectively, and I feel their stories are less and less mine to tell.
However, I will reveal that neither my son nor my daughter is enamored with organized sports or other activities.
Fellow parents are often taken aback when they ask whether my child is signed up for such-and-such or so-and-so, and I answer "No," and "No."
We have tried, soccer, swimming, baseball, the Scouting movement, music lessons and other pastimes...no go. I have had moments where their reluctance to participate was translating into my own feelings of helplessness and failure. After all, I was involved in organized sport throughout my childhood, and my experiences on-ice where much-more favorable than many encounters I experienced in school hallways (I figure skated for seventeen years).
Everybody else's kids signed up for stuff, why not mine? Shouldn't I force them? Shouldn't I argue more? Who's the parent, anyway? 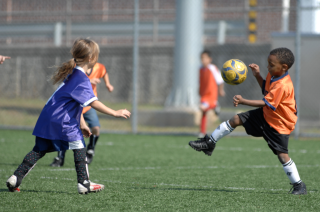 Then I read the Washington Post article, which speaks of children being urged against their will into activities they don't enjoy.
At times, that push-pull dynamic results in a child who is anxious, stressed and withdrawn.
Many kids love 7 AM hockey practices. Organized sports offer physical activity, life lessons, socialization, and a feeling of community for both parents and their little athletes.
But, they are simply not for everybody, and, here is the affirmation which gets pushed aside more and more often during the age of social media and internet parenting blogs: That's okay.

My son bike rides for dozens of kilometers alone or with our family; in his spare time he loves learning how to code computers.
My daughter will have dance parties in her room with her friends, and plays basketball in the driveway with her mom and dad.
Both my kids seem well-adjusted and happy, despite being enrolled in nothing. And That's okay.

It is becoming harder and harder to remind ourselves that, in general, we know what is best for our child.
Sometime hockey practice and piano recitals are simply not a good fit.
And That's okay.

Here is the interview:

Should We Be Teaching Our Kids to Have Grit ?

Suicide and Men at Risk, Part 2 - A Conversation with Dr. Sally Spencer-Thomas

Suicide and Men at Risk, Part 1 - A Conversation with Dr. Sally Spencer-Thomas

On Breakfast Television: The Pro's and Con's of Tech Gifts for Kids

Good share. I think the key is just picking your battles. If your child seems to have a habit of quitting everything no matter if it's hockey or piano lessons, then it may be time to put your foot down.