« Brain Development: What Happens in Utero Doesn't Stay in Utero | Main | What to Buy for Father's Day? Ask Him! (...and, no garage door openers.) »

Studies Desperately Try To Relate Household Labor with Happy Relationships (...without much success)

The article's headline reads "The More Chores a Husband Does, The More Likely The Marriage Will End in Divorce." It is safe to assume, in a clicks-equals-revenue world, that the Medical Daily website, which posted the article, is relying on a lot of reposts without read-throughs.
When I found the article Facebook, there were already the "Ha! See, honey?" comments from husbands, and, no doubt, a lot of face-palming from wives.

The article is based on an Oslo and Akershus University College of Applied Sciences report entitled "Gender Equality at Home." This report is based on two previous studies.
As with—I will assume—everyone who read the headline on the Medical Daily, I did not read the entire Norwegian report, nor did I peruse either of its parent studies. Regardless, reading the "Chores" post carefully gives the reader insight into how many parenting studies (especially once they are sifted into click-bait) offer more questions than answers, and follow those questions with very few concrete conclusions.

For example, the opening sentence on the Medical Daily site (if you manage to wrestle past the convenient 90-second video produced for the even shorter attention span) reads:

Couples may be better off living in a "traditional" household where women do all the housework if they want to stay together, according to a report from the Oslo and Akershus University College of Applied Science.

"May be better off." Through scientific reasoning, one can extrapolate that this also means, "May NOT be better off," however, this would not bode as well for Facebook shaming of the opposite sex.
Read on:

Here are some details not defined by those statistics: within that first group of 65 percent of couples who near-equally divide childcare, who shoulders more of the child-caring? Is it the husband, since his wife is busy completing household chores? We don't know.
The other big question, which is often left unanswered when debating housework, is: What defines housework? Laundry? No doubt. Dishwashing and vacuuming? I assume so. Lawn mowing, plumbing, or other home repair and maintenance tasks? Umm...oops, usually not.
I have written before about the many household tasks which are never considered "housework" for the survey monkeys. But, trust me, repairing foundation cracks and installing wall tiles are, indeed, chores. 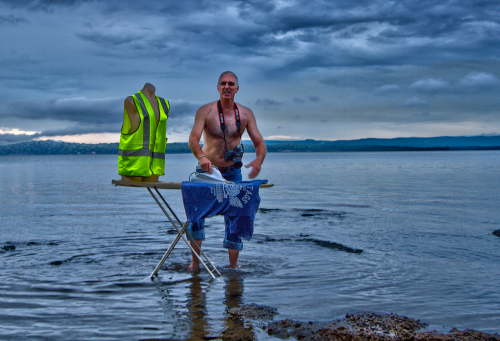 Housework by the Water - Bill Collison

To support the article's unjustifiably definitive headline, the report's author is quoted further down the article:

"The more a man does in the home, the higher the divorce rate," said Thomas Hansen, co-author of the study entitled "Gender Equality At Home," according to AFP. While researchers found no or very little cause-and-effect, they believe that the observation could be due to "modern" attitudes.

In other words, the division of domestic labor may have NOTHING to do with divorce rates. The stand-by hypothesis is that, within more modern (read: younger) couples, men and women feel more confident expressing their displeasure. This more quickly results in one, or both halves of the couple stating, "I want a divorce."
This could be because of snoring, drinking, infidelity, or a hatred of cats. We...just...don't...really...know.

The article continues with a lot of "Could-be's," and "Maybes," and completes its "We're not really sure," dismount with the following sentence:

The results from the latest survey appears to contradict a recent study carried out by researchers at Cambridge University earlier this year that found men were actually happier when sharing the housework.

And, women, in case you were looking to seek revenge on those guys who posted the article's headline along with an "In your faces, women!" emoticon, the article wraps up in fine emasculating form:

The Cambridge study was based on previously collected data from 30,000 people in 34 countries. Researchers found that men had benefited the more they contributed to household chores, but researchers suggested that this could also be because they preferred a quiet life doing housework than having a disgruntled other half.

In other words: men can't possibly be happier sharing household chores, right? It must be that these indecisive Cro-Magnons just nod and smile and do what they're told because there is nothing worse than being scolding by the missus.

Researchers often spend years deriving conclusions and battling to be published. What a massive disservice to academia—as well as to any understanding we hope to glean from it—when click-bait sites reduce one-hundred pages of research into four-hundred words of non-commitment and misunderstanding.
And then we repost that drivel for them. 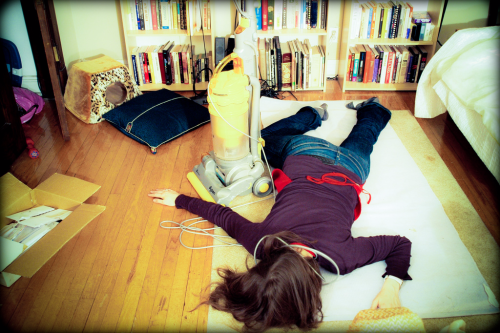 Photo: Face Down Tuesday, The Dyson Wins by TheeErin