Sgt. Pepper Puts a Spin on Connecting with Teen

We had a turntable in our basement, though I had no appreciation at the time of how inferior a machine it really was. It spun primarily Dr. Seuss's “Fox in Sox,” and its ‘B’ side, “Green Eggs and Ham.” Another favorite of mine was an LP of “Sneetches and Other Stories,” also by Seuss. The last track on the album - its “A Day In The Life” - told the story of Seuss's gender non-specific protagonist being stalked by a pair of pale green pants with nobody inside them.
In 1979, I was not yet 8-years-old; the thought of being pursued by abandoned trousers was darn spooky, thank you.
My records were decorated with chalk doodles and tattooed with permanent needle drags. But, who cared? The machine, and the stories it told, were timeless companions...until, that summer, I was introduced to what true magic could be conjured by a vinyl record.

My family’s semi-detached cottage was in semi-industrial suburb on the island of Montreal. Several times each year, the six of us would pack ourselves - and our patience - into a midsize sedan and drive five or six hours west to visit my first-cousins in Toronto. The three Ontario brothers were, on average, ten years older than I. So, not only was I careful to pack a healthy imagination for a long drive sandwiched between by siblings in the back seat, I was also smuggling a healthy portion of hero worship for the visit that awaited me.

As with most homes that are not your own, my perception of the house in the borough of East York was that it was filled with cool stuff. There was the secret kitchen drawer filled with Twizzlers and marshmallows. There was an upright piano guarding a basement room whose floor was coated with orange shag carpeting. As if waiting for a scene from Studio 54, the matting continued up the side of a bar, whose melamine counter was illuminated with red and green pot lights which resembled oven burners inverted into the ceiling.

Trippy. Even for an 8-year-old.

Each of my cousins’ bedrooms had as its centerpiece a high-end hi-fi system, with hearty speakers of dark wood and black mesh hiding behind them whatever magic made the music.

The stereo offered only two sources of entertainment: an AM/FM radio...and “phono,” which channeled the turntable.

While I sat cross-legged on his bedroom floor (my 1979 joints were more forgiving than they have been in the 21st century), my cousin selected an album from the horizontal stack in his closet and said, “You should listen to this.”

He handed me a pair of headphones which were so large that, once they were clamped over your ears, one could not help but compare oneself to Princess Leia, whose brunette Kaiser rolls had become legendary two years earlier.

The ‘phones were umbilically connected to the amplifier by the granddaddy of electrical cords - a black, coiled cable long enough to remain attached to your headphones and still offer a freedom of movement which would compete with the cordless technology a decade into the future (until it became a knotted mess as a result of too much pacing and multi-tasking).

The headphone jack sparked and hummed as I connected it to its female counterpart - as though whatever was bottled inside the machine sensed its imminent release.

Moments later, as the needle skated along the first inches of vinyl groove, I was introduced to “Sgt. Pepper’s Lonely Hearts Club Band.”

What a funny name, I thought.

Then, immersed in my first stereo recording experience, I was surrounded by an orchestra tuning up, followed by a rock band’s thirty-nine minute story which began “...20 Years Ago Today.” 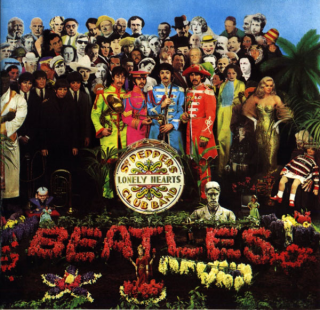 Thirty-nine years later, my wife and I smuggled our thirteen-year-old son’s Christmas present out from the corner of our bedroom - an Audio-Technica turntable.

Everything old is new again.

In our basement, leaning up against books of decades ago by Ayn Rand and Stephen King (the former my wife’s, the latter mine), stood a dusty collection of mistreated vinyl: Faithful Seuss, Hitchcock stories, and Batman adventures. All of which were fettered with more scratches and speed-bump warps than any needle could handle.

The old gang was no match for a new phonograph.

This is why my son’s gift also included a certain album whose cover alone could captivate one for hours.

Fate has its own sense of timing which often dabbles in the extremes of “perfect” and “horrible.” Ron Howard’s “Eight Days a Week,” was released in 2016. The following year, the world would celebrate the 50th anniversary of the Fab Four’s seminal album. As a companion to the musical landmark, PBS broadcasted “Sgt. Pepper’s Musical Revolution.”

The documentary dissected the LP: how it was recorded, why is was recorded, what techniques were used, and how innovated the band - and especially George Martin - had to be to glean the sound they wanted from 1967 technology.

Perfect. Fate provided my eldest with a Sgt. Pepper master class during the run-up to Christmas. 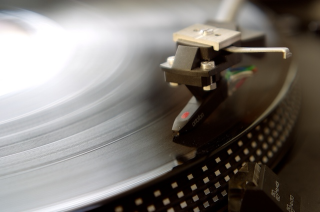 While my son’s gift was uncovering the revolutionary magic of analog needles and grooves, my gift was reliving my adolescence through the hums of base notes and the vibrations of rock-band-meets-orchestra working its way through my bedroom floor.

In his room, just below mine and my wife’s, the record was spun over and over, with brief pauses only to rotate from side A and back again.

Nostalgia is a creeping companion. It appears to some as re-creations of memories, to others as the mechanical wonder of a needle racing round and round through a vinyl canal, digging from them the ghosts of an English quartet.
I think this is where the past is a wink ahead of the future.

The past was never instantaneous. Anticipation and patience were things to be celebrated: the moments during which the record spun, but the needle still searched for a composition’s first notes; the slow-motion retreat of a tone arm back to its seated position awaiting whatever jewel may be encrusted in the B side of a classic work.

Digital is instant. Digital is right now. To lag is to fail; to wait is to waste. There is no anticipation in buffering, only aggravation.

A vinyl record is, like a child, is something which must be cared for; something which takes time to play itself through; something to discover.
The only thing which gives more pleasure than marvelling in discovery is being awed by rediscovery.

I will never relive my first encounter with Green Eggs, or Hitchcock, or the Batman. But I can, thankfully, revel in my reintroduction to Lovely Rita (where would I be without her?). All thanks to a little help from a revolving platform, a curious teenager, and that infamous band leader, Sergeant Pepper.

Posted at 08:13 PM in Fatherhood, Getting Old, Parenting | Permalink